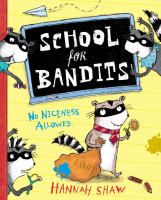 This was a cute and funny book. I enjoyed the pictures. The message is, "do not steal and have good manners."

Mr. and Mrs. Raccoon were worried about their son, Ralph Raccoon.
Ralph wasn’t a typical raccoon. He was kind and helpful. He was polite. He didn’t like to cause mischief or make messes, even in neighbours’ garbage cans. He was clean and tidy. He didn’t throw food around, and he even brushed his teeth each night.
Mr. and Mrs. Raccoon were alarmed by Ralph’s excellent behaviour – so much so that they sent Ralph to bandit school to learn some bad manners. (How else would Ralph ever become a great raccoon bandit like Grandpa Cutlass or Uncle Whiskers?)
On his first day at the School for Bandits, where “no niceness was allowed”, Ralph could see right away that he wasn’t going to fit in. And he was correct. Ralph didn’t enjoy or do well in any of his classes, such as Bandit Behaviour 101, Bad Manners 101, Mischief & Messes 101, and Raccoon Science. In fact, he was hopeless!
One day, his teacher, Mrs. Mischief, announced a competition: the Best Bandit in the School Competition. Who could fill their bandit sack with the most pilfered treats over the weekend?
All the students were excited, except Ralph. He was so certain he’d lose that he didn’t even try.
When Ralph headed back to school on Monday morning, he continued his usual helpful behaviour. He gave directions to someone who was lost. He rescued a kitten stuck in a tree. He swam out to the middle of a pond to retrieve the wind-blown belongings of an entire outdoor orchestra. Each time, Ralph was rewarded with treats that went into his bandit sack.
By the time he arrived at school, the sack was so full that Ralph won the Best Bandit in the School Competition!
His teacher was surprised, but his parents were very proud of Ralph. “Just like Grandpa Cutlass!” said his father.
When the other raccoons begged Ralph to tell them his secret, he did. “Helpfulness and politeness are the best!” he said … and his classmates had to agree!
Children will very much enjoy this witty school story and its relevant message.

There are no notices for this title yet.

There are no quotes for this title yet.

Loading...
No similar edition of this title was found at MPL.

Try searching for School for Bandits to see if MPL owns related versions of the work.