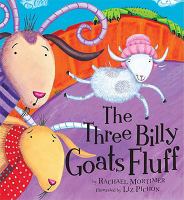 In this retelling of the classic fable, how is Mr. Troll supposed to sleep when the three Billy Goats Fluff travel noisily over his bridge every day? The goats go to a field that makes their fleece extra fluffy for Mother Goat's knitting business. One day Mr. Troll loses his temper and threatens to eat the Fluffs. How will Mother Goat solve the problem and make a friend of Mr. Troll?
Publisher: Wilton, CT : ME Media, 2011, c2010.
ISBN: 9781589251014
1589251016

A good lesson in cooperation. The book teaches the art of putting oneself in the other person's shoes, so to speak, and rather be afraid or than judge too harshly, to instead find an acceptable solution to differences.

When Troll moved in under the bridge, he wasn’t expecting a family of goats to be trip-tripping noisily over “his” bridge every day.
But that’s exactly what happened each day when the Billy Goats Fluff crossed the wooden bridge from their home on one side to eat the lush pasture grass on the other side. Trip-trap! Trip-trap! How was Troll supposed to sleep? How was he supposed to concentrate?
One day Troll had had enough. When Littlest Billy Goat Fluff appeared at the bridge, he heard an angry roar. “I’m a Troll with a very sore head. Stop trip-trapping over my bed! When I’m tired and feeling blue, there’s nothing quite like LITTLE GOAT STEW!”
Just then, Middle-Sized Billy Goat Fluff approached and was greeted with, “I’m a Troll in a very bad mood. Waking me up is terribly rude! Middle-sized goat makes a LOVELY ROAST, or tasty pate upon my toast!”
The goats raced back home to Mother Goat, too scared to cross the bridge. “We’re telling our mom on you!” they shouted.
When Mother Goat heard their tale of woe, she didn’t march straight to Troll to yell at him. She didn’t panic either. Instead, she thought … and thought some more. (After all, Mother Goat could sympathize with Troll’s lack of sleep – Littlest Billy Goat still woke her up every night!)
It wasn’t long before Mother Goat, as she sat knitting some slippers and earmuffs from the finest billy goat fluff, came up with an inventive idea that made everyone, including Troll, happy and warm - and well-rested, too!
Rachael Mortimer’s entertaining retelling of the traditional story is complemented perfectly by the comical and colourful illustrations of illustrator Liz Pichon.

There are no notices for this title yet.

There are no quotes for this title yet.

Loading...
No similar edition of this title was found at MPL.

Try searching for The Three Billy Goats Fluff to see if MPL owns related versions of the work.